Feast of Saint Job of Pochaev 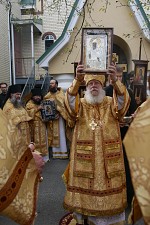 The first abbot of the Pochaev Lavra in Volynia, Little Russia, was St. Job, who besides being a holy guide of monasticism, was a fervent defender of Orthodoxy in an area besieged by the Roman Catholics.  His zeal was in publishing the printed word.  His struggles in this way were later continued by an offshoot of this monastery, founded in the 1920’s in Slovakia.  Towards the end of World War II, the printing brotherhood of this monastery was forced to flee the onslaught of the Red Army, and most of them eventually found their way to the New World, to our Holy Trinity Monastery in Jordanville, New York.  Glory be to God, we continue to this day their enlightening work in the printed word.

On August 27 (September 10, N.S.), the feast of the Uncovering of the Relics of St. Job, the monastery celebrates the patronal feast of our lower church and of the printing brotherhood of the monastery.  His Grace Bishop Luke, along with the monastery clergy and guests concelebrated the Divine Liturgy, in the presence of the Myrrh-Streaming Hawaiian Icon of the Most Holy Theotokos.  Many pilgrims were present, in part, to venerate the icon and to partake with the brotherhood this joyous feast.   This was also the Name’s Day of the monastery’s eldest father, Archimandrite Job (Kotenko).

At the end of the Divine Liturgy, there was a moleben with Cross Procession around the cathedral with the Hawaiian Icon and an icon of St. Job.  After a festive lunch, the Hawaiian Icon was carried around to all of the cells of the monastics and seminarians.