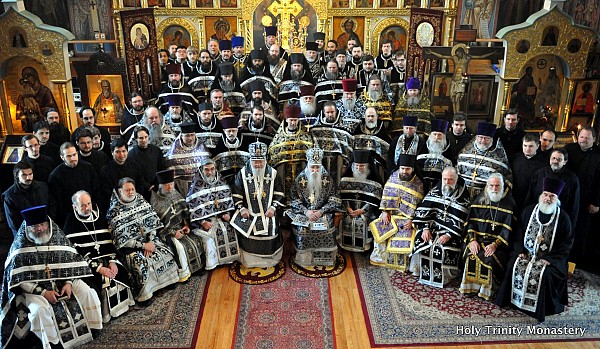 On Wednesday, March 13, the Northern Lenten Retreat for clergy, matushkas, and seminarians of the Eastern American Diocese commenced at Holy Trinity Monastery in Jordanville, NY. In light of the unusually cold early spring weather – the night before, pouring rain turned into a snowstorm in the face of sharply falling temperatures ‒ some clergy took care to arrive at Holy Trinity Monastery early. The First Hierarch of the Russian Church Abroad, Metropolitan Hilarion of Eastern America & New York, and Bishop George of Mayfield arrived on the eve of the retreat, and prayed at the Liturgy of the Presanctified Gifts on March 12 alongside the monastic brethren, seminarians, and pilgrims.

On Thursday, March 13, despite the inclement weather making distant travel difficult, clergy gathered in the main hall of Holy Trinity Seminary from across the Diocese ‒ from Miami to the parishes of Upstate New York, having braved the long, hard trip in the days of the Holy Forty-Day Fast. Taking part in the Northern Lenten Retreat are 60 clergymen and matushkas, as well as the seminarians of Holy Trinity Seminary.

Prior to starting their shared undertaking, Eastern American Diocesan secretary Archpriest Serge Lukianov served a moleben "Before the Beginning of Any Good Work." Metropolitan Hilarion addressed those gathered with a welcoming address; His Eminence noted that, "in the days of Great Lent, the Eastern American Diocese traditionally holds a lenten retreat, which is spiritually beneficial not only for laymen, but for clergy, who usually have very little opportunity to comprehensively confess their sins and receive spiritual counsel and support from their brother clergy and senior priests. Great Lenten retreats provide a chance to discuss issues of interest facing clergy in the complicated conditions of modern life in a constantly changing world… a chance for interaction, for close acquaintance with one another and with future pastors of our Diocese." Metropolitan Hilarion expressed his hope that the clergy, matushkas, and seminarians might receive, from such mutual interaction and prayer, spiritual comfort and instruction for their ongoing service to Christ’s Church.

Greeting those gathered, monastery rector Archimandrite Luke (Murianka) noted the spiritual beneficial effect of visiting monasteries, especially in the days of Great Lent. Such visits provide an opportunity for confession and prayer before the monastery’s holy icons and relics, and he invited all to visit the monastery more often, whenever the chance might arise.

The main speaker at the Northern Lenten Retreat was scheduled to be renowned church author Archpriest Andrei Tkachev of Kiev. However, in light of the difficult political situation in Ukraine, Fr. Andrei was not given a blessing to leave his parish and travel to the U.S. Instead, the rector of St. John the Baptist Cathedral in Washington, DC, Archpriest Victor Potapov, delivered a lecture to those gathered entitled, "Orthodox Pastoral Service in the 21st Century," stressing real instances for collaboration between the pastor, society, and the faithful. At the request of retreat participants, Fr. Victor also delved more deeply into methods of organizing pilgrimages, and answered questions relating to the potential glorification of the guardian of the myrrh-streaming Iveron-Montreal Icon of the Mother of God, Brother Jose Muñoz-Cortes, who is famous throughout the Orthodox world.

Metropolitan Hilarion read aloud a special epistle to the clergy and faithful of the Eastern American Diocese on the occasion of the 80th anniversary of the founding of the Diocese. Several questions were posed regarding thenew Diocesan Center at St. Alexander Nevsky Cathedral in Howell, NJ, which were fielded by members of the Diocesan Council – Archpriest Serge Lukianov, Archpriest Victor Potapov, and Priest Alexandre Antchoutine. Council members called on those present to take a more active role in diocesan life, and answered the clergy’s many questions. Fr. Serge then introduced those gathered to the new members of the clergy, those who had entered the Eastern American Diocese in the year since the last Lenten Retreat.

After a break, during which participants had a chance to peruse Holy Trinity Monastery’s new publications and acquaint themselves with the monastery bookstore’s latest inventory, a roundtable discussion was held between clergy and seminarians.

The first day of the Northern Lenten Retreat ended in the late afternoon. After the evening meal, Lenten Matins were served in the monastery’s main church ‒ Holy Trinity Cathedral. There, the clergy had an opportunity to go to the sacrament of Holy Confession.

On Thursday, March 14, the Northern Lenten Retreat of clergy, matushkas, and seminarians of the Eastern American Diocese at Holy Trinity Monastery in Jordanville, NY concluded with a Hierarchal Presanctified Liturgy in the monastery’s main church, led by the First Hierarch of the Russian Church Abroad, Metropolitan Hilarion. His Eminence was co-served by His Grace George, Bishop of Mayfield, and the retreat’s clerical participants:  40 priests and 12 deacons. The Liturgy served as an expression of the spiritual unity of the Eastern American Diocesan clergy, who had gathered during the days of the Holy Forty-Day Fast in the cradle of the Russian Diaspora ‒ the first Orthodox monastery founded by ascetic monastics who arrived in the American land from Transcarpathia.

Singing at the divine services was the seminary choir, under the direction of Reader Nicholas Kotar. At the Little Entrance, Hieromonk Gabriel (Kvasnikov; rector of Holy Trinity Church in Mebane, NC) was awarded the right to wear the gold pectoral cross. Metropolitan Hilarion offered up special prayers for the granting of peace to the Ukrainian people, suffering from civil strife and disorder.

The many clergy, monastics, seminarians, and pilgrims communed of Christ’s Holy Mysteries. In honor of the Lenten Retreat, a general photograph was taken of the participants with their Archpastors.

After the Liturgy, a farewell luncheon was held in the monastery refectory, during which Metropolitan Hilarion thanked the rector, Archimandrite Luke (Murianka), and the brethren for their hospitality; diocesan secretary Archpriest Serge Lukianov and diocesan staff for their more than month-long work organizing the pastoral conference; and the rector of St. John the Baptist Cathedral in Washington, DC, Archpriest Victor Potapov, for his interesting lecture, which drew a lively response and discussion from the clergy.

Fr. Serge Lukianov, addressing the seminarians, said: "It seems as though we, former seminarians ourselves, were only just recently sitting here on these benches, thinking, as you are now, to what parish, state, or country we will be sent; who our matushka will be; what kind of children we will have. The years have passed, but even now, coming to the monastery and entering the church or the refectory, we see the faces of the monks and remember: there sat Fr. Panteleimon, there ‒ Fr. Flor. There went Fr. Vladimir, and there, in the ponomarka, sat Father Protodeacon John Onopko, who also is no longer with us. How many ascetics have labored here! And it brings us joy to know that our best years were spent in seminary. And here is our advice to you, seminarians: these are the most precious years. You can ask any priest or deacon who studied here, and he will tell you, that this was a most golden time, which we could dedicate to prayer and our studies."

Fr. Serge also sincerely thanked Fr. Luke for the warm welcome and the lovingly prepared lenten meals, and expressed particular gratitude to Metropolitan Hilarion and Bishop George for their participation, service, kindheartedness, and spiritual instruction to the clergy, all of which is especially comforting in the days of Great Lent.

Archpriest Victor Potapov and Fr. Serge, accompanied by retreat participants, monastics, and pilgrims, made their way to the monastery cemetery, where they served a panihida for the repose of the murdered Brother Jose, guardian of the myrrh-streaming Iveron-Montreal Icon of the Mother of God. Fr. Victor called on the clergy to serve litiyas for the repose of the chosen one of the Mother of God, renowned throughout the world, who served her with devotion until his own martyric death.

With that, the Northern Lenten Retreat concluded. In the second half of the day, participants ‒ spiritually comforted and illumined ‒ returned to their parishes.