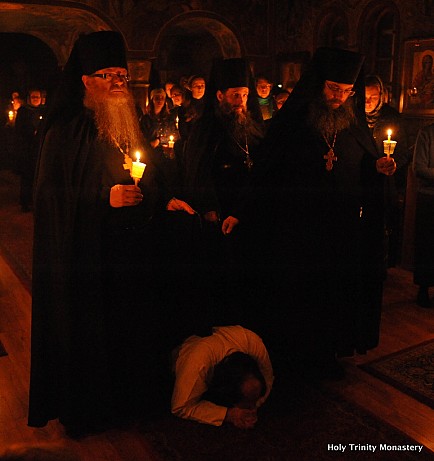 "On Friday, April 4, on the eve of the feast of the Laudation of the Mother of God, Matins were served in Holy Trinity Monastery in Jordanville, NY, and an akathist served before an icon of the Protection of the Most Holy Theotokos containing a piece of the Ever-Virgin’s Cincture (Belt). The Matins service was led by monastery rector Archimandrite Luke (Murianka), co-served by monastery and visiting clergy.

Upon completion of the service, Fr. Luke performed the monastic tonsure of Priest Nicholas Olhovsky, elected Bishop of Manhattan. In tonsure, Fr. Nicholas was given the name "Nicholas," in honor of the Holy Hierarch Nicholas of Japan. Fr. Luke likewise tonsured the Novice John to Rassophore Monk.

By resolution of the ROCOR Synod of Bishops, Priest Nicholas Olhovsky (cleric of the Synodal Cathedral of the Sign in New York City) was elected Bishop of Manhattan, vicar of the Eastern American Diocese. His election was confirmed by His Holiness Kyrill, Patriarch of Moscow & All Russia, at a regular session of the Holy Synod of the Russian Orthodox Church on March 19, 2014. Fr. Nicholas’ consecration to the episcopate will take place during the gathering of the Sobor of Bishops of the Russian Church Abroad in San Francisco on June 27-July 4 of this year."