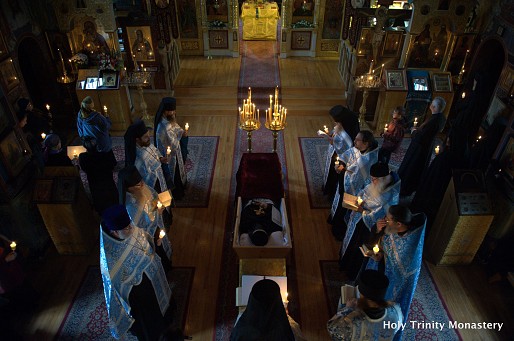 Fr John Campbell (known previously as Fr Lawrence Cambell ) reposed peacefully in the Lord just before midnight on Monday November 3, 2014.  He  spent much of his life preparing English-language texts of the Divine Services and private prayers, most notably the 4th edition of our Jordanville Prayer Book and the Unabbreviated Horologion. He was an English teacher in San Francisco in the 60's, an  American born on Novemember 14, 1932,  who became friends with Gleb Podmoshensky  (Father Herman) and  Seraphim Rose (Father Seraphim)  in their little bookstore a few doors down from the Sobor on Greary Blvd in San Fransisco. He became Orthodox and had come to Jordanville during the summer months the year St John of San Francisco died. When Archbishop Averky, Metropolitan Laurus ( then Archimandrite ), along with Archbishop Leonty of Chile decided to travel by car for the funeral along with Fr. Victor Lochmatow, Lawrence asked if he could come along. That was in June of 1966.  He ended up becoming a novice at St. Herman of Alaska Monastery in Platina CA in June 1966.

He became a riassophor monk at Holy Trinity Monastery, Jordanville, in 1979 and on March 31 2012 was tonsured into the small schema and received the name of Saint John of Shanhai and San Fransisco.

Fr. John's funeral was held on November 6, 2014 at Holy Trinity Cathedral. Fr. John was buried behind the Dormition Church in Holy Trinity Cemetary.

May the Lord grant rest to his soul. A more complete biography will appear in the near future.

Tonsure of Fr John into the Small Schema