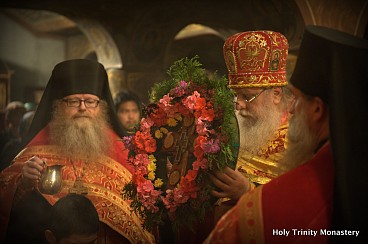 In reference to the service of the Exaltation of the Cross, St Andrew of Crete provides an explanation for the pouring of water over the cross. He states, "Had there been no cross, Christ could not have been crucified. Had there been no cross, life itself could not have been nailed to the tree. And if life had not been nailed to it, there would be no streams of immortality pouring from Christ’s side, blood and water for the world’s cleansing. Christ is the Living Water."

"O Lord, save Thy people and bless Thine inheritance. Grant victory unto Orthodox Christians over their adversaries, and by the virtue of Thy Cross, preserve Thy habitation."