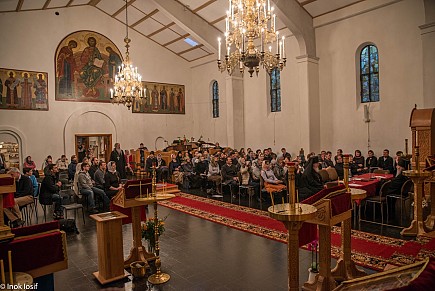 In late December 2015, Abbot Archimandrite Luke attended and presented a talk in Germany on the occasion of the 70th anniversary of the Monastery of St. Job of Pochaev in Munich,  Germany. The seminar began on December 24 and ended on December 26. Various talks were given about the history of the monastery, its historic connection to Pochaev, and the monasteries in Vladimirova, Slovakia and Jordanville, New York. Father Luke’s talk in Russian was titled, “Two Branches: One Root," where he traced the history of those monks that had lived in Germany and then settled in America at Holy Trinity Monastery.

Hierarchal Liturgies were served daily by Archbishop Mark with participating clergy concelebrating. Vladyka Mark arranged for Father Luke to visit one of the oldest Christian towns in Germany, Freising, where he was able to venerate the relics of Sts. Corbinian and Nonnosus. He also visited the thriving convent of St. Elizabeth the New Martyr, were he attended the All-Night Vigil on Saturday evening.  Father Luke, on Vladyka Mark’s invitation, also spoke to those present at trapeza Sunday, about life at Holy Trinity Monastery and Seminary.

It was a significant and historical occasion for the renewal of ties between our two monasteries, which share a common history.