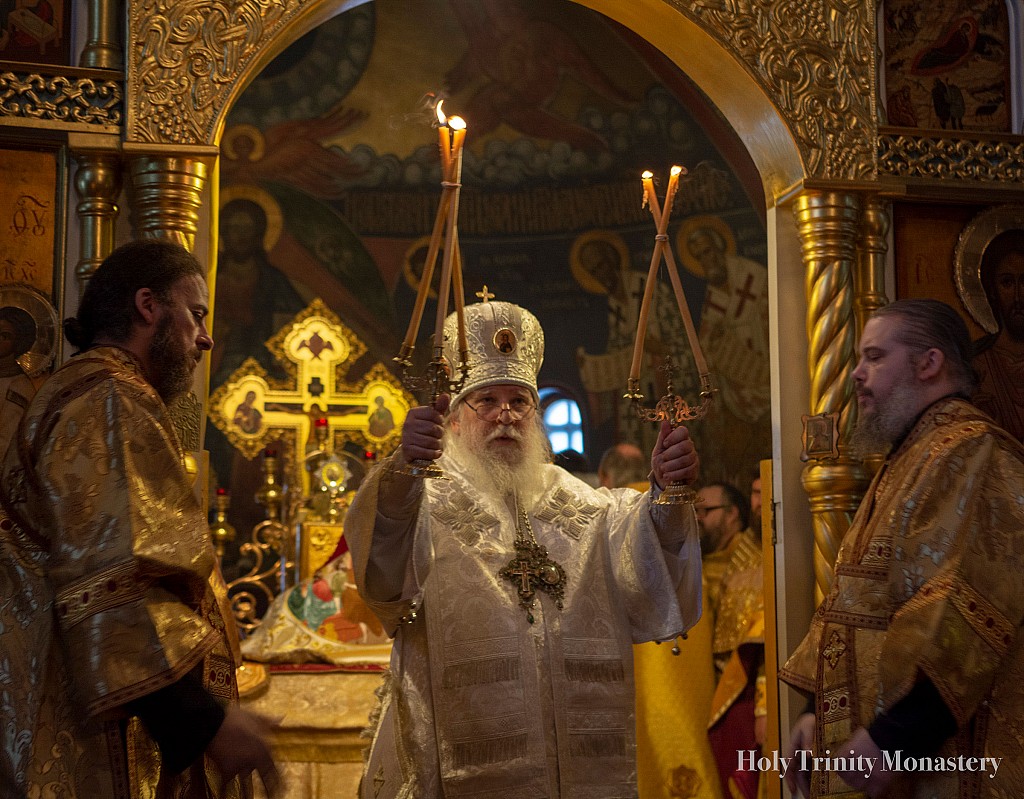 On February 12, 2019, the seminary feast of the Three Hierarchs, a wondrous and historic event took place in the life of the monastery.  Our beloved abbot, Archimandrite Luke was consecrated to the episcopacy. Having been elected our abbot in May of 2008 to succeed the ever-memorable Metropolitan Laurus, the Synod of Bishops of the Russian Orthodox Church Abroad, in their December 2018 session, elected Fr. Luke to become Bishop of Syracuse.  He will continue to be the abbot of the Holy Trinity Monastery as well as rector of the Holy Trinity Seminary.

Upon this joyous news, the brethren of the monastery formed committees to organize this event.  Fathers were appointed to decide how to feed the expected crowds of pilgrims arriving for the consecration as well as the liturgical aspects and media coverage.  There was little time to prepare, but thanks be to God, everything went off without any major problems.

Believing it to be beyond the capabilities of our brotherhood to prepare a meal for the expected hundreds of pilgrims, a local catering service was contracted.  The Eastern American diocesan media group was requested to take care of the filming and live streaming of the services. Also, our local talented camera men participated in this effort.  It was the wish of Bishop Luke to have available photocopies of the offices of Nominition as well as the Confession of Faith and the actual Consecration prayers in both Church Slavonic and English.

On the eve of the feast, our Metropolitan Hilarion arrived, accompanied by Metropolitan Luka of Zaporozhye, Ukraine.  For the brethren, it was a great joy to have someone from the suffering Ukrainian Church participate in the consecration.  Also arriving this day to take part were Archbishop Gabriel of Montreal and Canada, and Bishop Nicholas of Manhattan.

At 5PM, the office of Nomination (Election) took place in the monastery cathedral.  During this relatively brief service, Archimandrite Luke was presented to the bishops and read a short speech concerning his life and background and desire to obey the call of the bishops to serve the Church in a new role as bishop.  In his speech, Fr. Luke remarked concerning his family background, about how among his ancestors, all of Carpatho-Russian background, there were priests and even some bishops, all of whom were defenders of true Orthodoxy.

At 7PM, the All-Night Vigil for the feast of the Three Hierarchs was served as usual.  Besides our local community, many pilgrims arrived from around the United States and also Canada and even Russia, to show support to our beloved abbot and spiritual father, someone who for over 40 years has been a widely known due to his varied activities in the life of the monastery, the seminary, and the Church at large.

On Tuesday, the 12th, despite the threat of inclement weather, hundreds of clergy and faithful assembled in the cathedral.  Many of the clergy had been spiritual children of Fr. Luke or still are, and were under his guidance as one-time Dean of Students of the seminary.  Also, it was widely felt that many came to rejoice at the fact that once again, the monastery had a bishop-abbot. Since the 1940’s, the monastery has had as its abbot a bishop, up until the repose of Vladyka Laurus.

The hours were started at 8:30AM, so that the archpastors who needed to return to New York could try to avoid the full effects of the approaching winter storm.  At 9AM, the First Hierarch, Metropolitan Hilarion, was greeted at the entrance of the cathedral by numerous clergy, approximately 40 in all. According to the rubrics, Fr. Luke venerated the main icons along with Vladyka Hilarion as the entrance prayers were read.

After the washing of hands and the exit from the altar of the other bishops, joining the metropolitan in the middle of the church, the Office of Confession of Faith was held, with Fr. Luke reading the Creed, later an extended version of the Creed, followed by a confession of adherence to the central dogmas and canons of the Church.  After receiving the blessing of the bishops and the intoning of the Many Years, Father returned to the altar, where for the first time he stood upon an eagle rug.

The Office of Consecration itself took place during the chanting of the Trisagion.  As Fr. Luke knelt before the Holy Table, the bishops placed an open Gospel upon his head and read the prayers of consecration.  Many were moved to tears by a sense of the presence of the Holy Spirit. Long time acquaintances and relatives of Fr. Luke, gazing upon this all, felt their long-held desire for his elevation fulfilled.  “Axios, Axios, Axios,” rang out from the clergy, followed by the monastery choir as each episcopal vestment was placed upon the now Bishop Luke. At the conclusion of this, Bishop Luke blessed the faithful for the first time with the dikiri and trikiri.

Subsequently, Vladyka Luke concelebrated the Divine Liturgy with his now co-brethren bishops.  As is customary, he performed his first ordination: that of a former seminarian, Fr. Artem Siss, recently arrived with his family from Belarus, appointed to serve in the convent of Novo-Diveevo, near New York City.

At the end of the Divine Liturgy, all the bishops assembled in the center of the cathedral for the presentation of the newly consecrated Bishop Luke, who stood before them for the first time in his episcopal mantia.  After a brief speech, Metropolitan Hilarion presented Vladyka Luke with his archpastoral staff. He then ascended the cathedra and blessed those assembled in all directions.

Upon photographing all the clergy together with the hierarchs, all those attending were invited to a scrumptious  celebratory banquet in the seminary hall. Food was also provided in the former printing area for those who could not fit into the hall.  Warm greetings and congratulations were given by the bishops throughout the meal as well as greetings from Bishop George in Australia. The Very Rev. Alexander Webster, dean of the seminary, presented Vladyka Luke with a gift from the seminary, and Seminarian Reader John Keller presented His Grace with gifts from the seminarians.  Igumen Theophylact, on behalf of the monastery brethren, gave a heartfelt speech about his long acquaintance with Vladyka, his godfather and spiritual father, and remembrances of the older fathers, all reposed with the exception of our oldest brother, Archimandrite Job.

At approximately 3PM, the prayer of dismissal was sung, and with the blessing of the new bishop, Vladyka Luke, as well as the other bishops assembled, the faithful departed with great joy over the abundant mercies bestowed upon us this blessed day.

Amen, and Glory Be To God For All Things!