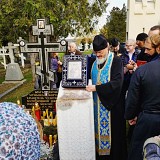 As has been their custom since the horrific death of Brother Jose Munoz in, the guardian of the Montreal Iveron Myrrh-Streaming Icon in 1997, the cathedral parish of St. John the Baptist of Washington, D.C. has organized an annual pilgrimage to the Holy Trinity Monastery, in whose cemetery repose the earthly remains of Brother Jose.  Led by Archpriest Victor Potapov and other clergy, a busload of pilgrims arrived on Saturday afternoon, October 26th, whereupon a pannikhida was served at Brother Jose’s gravesite.  Many other pilgrims, neighbors as well as monastery brethren and seminarians joined in remembering Brother Jose.

The usual All-Night Vigil, following the evening meal, was served, with many of the pilgrims availing themselves of the mystery of Confession.   The following day, Metropolitan Hilarion, who had stayed in the monastery since the recent Diocesan Clergy Conference, presided at the Divine Liturgy, concelebrated by the monastery clergy as well as our visitors from Washington.

All of this was accompanied by the presence of the Hawaiian Myrrh-Streaming Icon, which had been returned to the monastery by its guardian, Fr. Deacon Nectarios, after having been present at the beginning of the clergy conference.  Truly, despite the inclement weather, all felt compuncionate joy at the presence of such a holy object, which reminded many of the older fathers of the many visits to the monastery of Brother Jose with the Montreal Iveron Icon in times past.