Sunday, People's Commemoration of St. Job of Pochaev and Pochaev Icon of the Mother of God 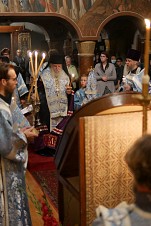 The Pochaev Lavra in present day Ukraine, is one of the most venerated holy places of Holy Rus.’  It has had a very difficult and complicated history due to the struggle to maintain Orthodoxy in that part of ancient Rus,’ and is very much connected with the history of our monastery as well as the whole Russian Orthodox Church Abroad.

Founded in the 16th century, its first abbot was St. Job, who struggled for many years against the Unia forced upon the peoples of Small Russia by the Roman Catholics.  Although eventually secured for the Russian Orthodox Church in the 19th century, once again, the same forces are at work in Ukraine with the Unia and schisms still at work to divide the faithful.  All this time, the Pochaev Icon has been the source of great spiritual strength and comfort for the faithful.

Our Holy Trinity Monastery greatly increased in size and strength with the arrival of the brotherhood of the St. Job Monastery in Slovakia after World War II, that monastery itself an offshoot of the Lavra in Pochaev.  The brotherhood was gifted with a miraculous copy of the Pochaev Icon, still very much venerated in the homeland.

From almost the foundations of our monastery, an “All-People’s Feast” was established Labor Day weekend, taking advantage of the long weekend so that the faithful might be able to make a pilgrimage to the monastery and pay homage to St. Job and the Pochaev Icon of the Mother of God.

Many people made their way to the monastery Labor Day weekend and participated in the special services.  Besides the procession with the icon on Saturday of the weekend, already described in a previous article, there was a solemn All-Night Vigil Saturday evening with hierarchal Divine Liturgy on Sunday, September 5th, celebrated by His Grace Bishop Luke with the monastery clergy and guest clergy. Second year M Div Student Romanos Regado from the Phillipines was made a sub deacon during the Sixth hour before the Liturgy. May God help him in his service to the Church.  The following day, Labor Day, there was a later Liturgy for the benefit of the pilgrims still staying, taking advantage of the civil holiday.