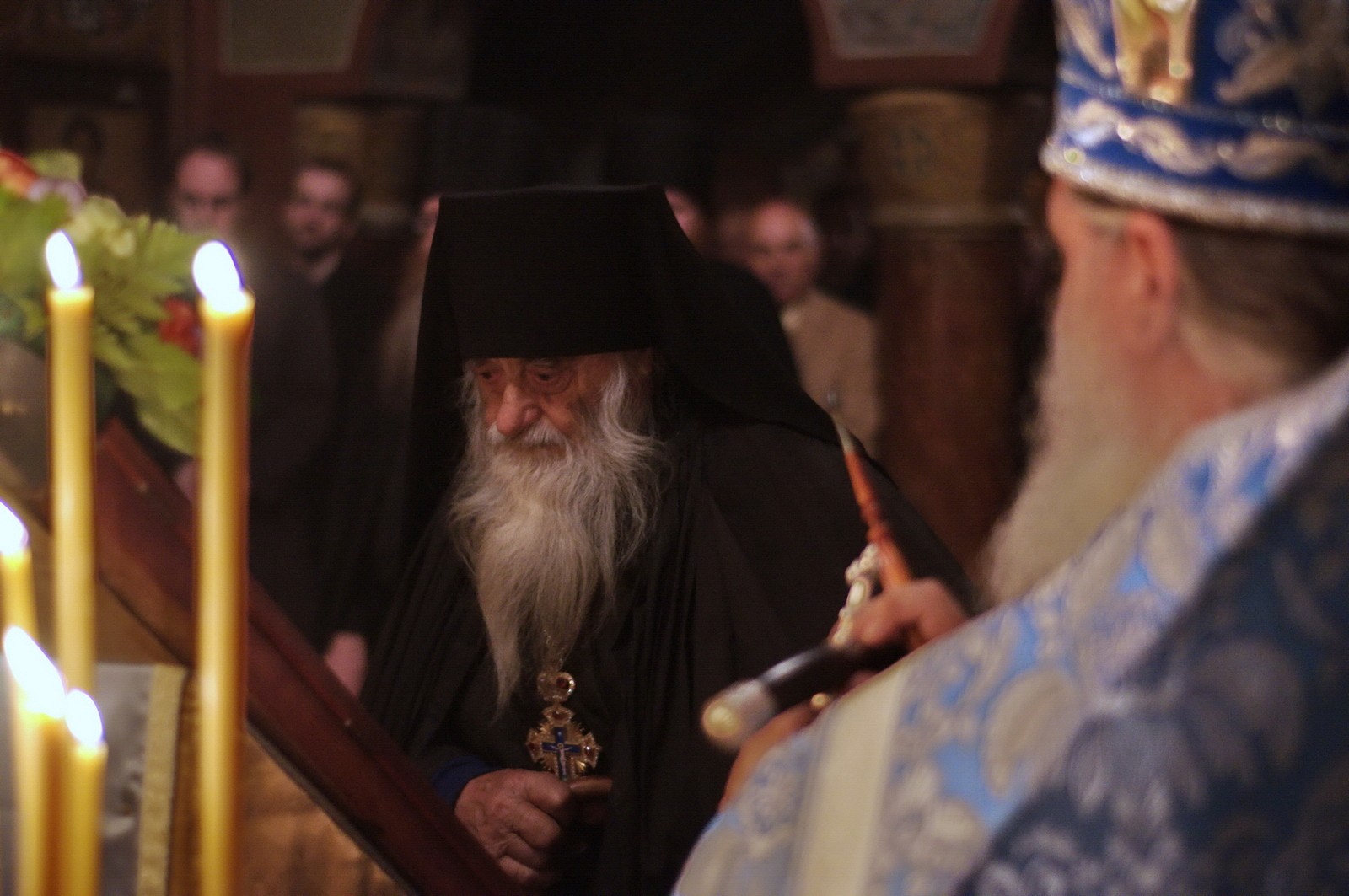 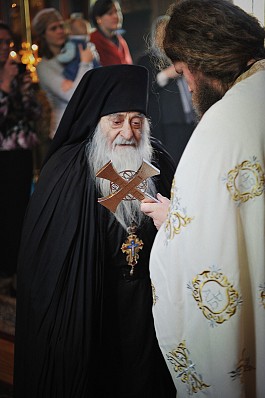 The early morning hours of November 6, 2021, the feast day of the Icon of the Mother of God «Joy of All Who Sorrow», saw the passing of Archimandrite Iov (Kotenko), the oldest monastic of Holy Trinity Monastery, who had spent 72 years within its walls. While liturgy was being celebrated in the monastery cathedral, Father Iov reposed peacefully at the age of 95 after a prolonged illness.

Archimandrite Iov was born on April 26, 1926 in the pious family of Sergei Ivanovich and Olga Dmitrievna Kotenko. In baptism he was named Ivan (John). He was the youngest of three children – the older siblings were named Nicholas and Claudia. Ivan’s childhood and youth were spent in Kharkov. The children wore crosses, and their mother had to send the children away to their grandmother’s house in an outlying village whenever a certain commissar or committee would appear in the city that were likely to demand that the children take off their crosses. Through some miraculous happenstances, all three were able to avoid joining the Communist Pioneer Youth.

Their mother, Olga Dmitrievna, belonged to the catacomb community of hieromonk Serafim Zagorovsky (1872-1943). Even before the Russian Revolution, Father Serafim (whose lay name had been Nikolai) had won renown as a fervent preacher and sensitive spiritual father who was entrusted by Elder Anatole of Optina with the obedience of being an “elder in the world”. (Fr Serafim was glorified among the New Martyrs and Confessors of Russia. See the chapter devoted to him in Ivan Andreev's Russia's Catacomb Saints: Lives of the New Martyrs, pp. 370-382). In the 1920s, Fr Serafim joined the ranks of “non-commemorating” clergy and from then on went into the catacombs, serving secretly in private quarters. Olga Dmitrievna would attend these catacomb services alone, without the children. At her own home, at great risk, she would from time to time give shelter to catacomb nuns from а sisterhood that was under Fr Serafim's direction. Тhey refused to take Soviet passports and were forced to live a wandering life, with no constant place of residence. The Kotenko family did not attend services in open, officially sanctioned churches. To this day, a cherished family treasure is the velvet pouch in which Olga Dmitrievna would carry the particles of Eucharist home from catacomb services for her husband and children.

In 1943, the Soviet forces started approaching German-occupied Kharkov. Fr. Serafim, who had already suffered greatly at the hands of the godless regime through multiple arrests and ехile in Solovki, felt that he did not have the strength to face the Bolsheviks yet one more time. With a heavy heart, he decided to leave the city and his motherland with the retreating German army. He blessed many of his spiritual children, including the Kotenko family, to do the same. “This way you will be able to pray and confess your faith in freedom” he said, and directed that in exile his spiritual children should attend services only in those churches where Metropolitan Anastasy, the First Hierarch of the Russian Orthodox Church Abroad, was commemorated. Worn out, emaciated and ill, Fr. Serafim soon reposed in the city of Przemyśl in southern Poland.

The Kotenko family settled in northern Italy in the environs of Merano. The menfolk worked at a local farm, while Claudia got a job in a pharmacy. They attended Divine Services in the church of St. Nicholas, which was part of the Villa Borodina, a Russian sanatorium built before the Russian Revolution. Services there were periodically conducted by Archimandrite Kallist (Podzolov), dean of the ROCOR parishes in northern Italy.

At that time, one of the two permanent residents of the Villa Borodina was Natalia Mikhailovna Pravosudovich (1899-1988), a composer who had studied at the St Petersburg Conservatory and then, in exile, with the eminent composer Arnold Schoenberg. Natalia Pravosudovich was a deeply religious woman, and was in correspondence with Archbishop Vitaly (Maksimenko), the abbot of Holy Trinity Monastery in Jordanville, New York. She subscribed to «Pravoslavnaia Rus'», a bi-weekly periodical which was published by the monastery, and, after perusing each issue, would pass it on to the Kotenko family.

In 1948, Pravoslavnaia Rus' published an article describing the tonsure of three new monks, fathers Flor, Laurus and Alipy, and quoting at great length from the touching and profound words of the service. Several issues later, Ivan encountered the announcement that a seminary was opening at Holy Trinity Monastery in October of that year, and resolved to enroll there. His sister scraped together enough Italian liras to buy two American dollars, and Ivan embarked on a ship to New York City, where he arrived in December of 1949. He was met there by Father Panteleimon (Nizhnik), one of the founders of Holy Trinity Monastery, who gave Ivan three more dollars to acquire any essentials he might need. Ivan added these to the two dollars that his sister had provided him with, and sent them back to Italy, telling his family to use them for passage to America.

Ivan’s parents and sister arrived in the United States in August of 1951. His older brother, Nikolai, had gone missing after he left Merano, against the wishes of his parents, to go south for a cure from tuberculosis, and for unknown reasons had been neither able to rejoin his family, nor communicate with them. Whenever Fr Iov would relate this story to his sister's children and grandchildren, he would always stress how important it is to be obedient to one's parents.

Evidently, Ivan regarded enrollment in seminary as a first stage on the way to monasticism. Reminiscing about this years later, Fr Iov recounted: “When I came to the monastery in 1949, I told Vladyka Vitaly right away that I had come to the monastery in order to become a monastic.” In March of 1951 Ivan became a riassophore monk, and one year later his tonsure into the mantia took place. His new heavenly intercessor became the Venerable Iov (Job) of Pochaev, in whose honor the lower church of the monastery cathedral is dedicated, and patron saint of the monastery's print shop. Father Iov was ordained hierodeacon in 1954, and in 1957 Archbishop Averky ordained him hieromonk.

When Vladyka Averky notified Fr. Iov of his intention to ordain him as hieromonk, Fr. Iov attempted to decline, citing his tendency to stutter when speaking. However, Vladyka replied that he viewed Fr Iov's ordination as a reward for all his labors, and promised that he would never send him to serve in a parish. (The hiermonks of Holy Trinity Monastery would sometimes be sent on Pascha or other holidays to serve in parishes that did not have a permanent priest.) And thus Fr. Iov lived for over 70 years in the monastery, without any lengthy absences, except for three times when he was sent on monastery business.

Fr Iov's main obedience was working on the monastery farm, which occupied him from early morning until late at night. In the early years of the monastery's existence, the monks would use horses in their farm labors. Later, they acquired a tractor, which Fr Iov welcomed with great relief. The monastery owned a herd of cows, which were milked in turn by monks and seminarians. “Vladyka Vitaly would come often into the cow barn, watch and express his approval,” remembered Fr Iov. “We raised potatoes, had our own root cellar. When it came time to harvest the potatoes, everyone would come out into the field. This was a joint obedience, and Vladyka Vitaly would come out, too, mainly to inspire the brotherhood. On Saturday mornings he would journey to New York City – there he served in the Bronx – and would return on Monday. He would always stand in the altar, and we would be reading on kliros. Vladyka Vitaly would correct our pronunciation. He would be praying in the altar and notice if we read something incorrectly, especially stressing wrong syllables. He was a remarkably pleasant and agreeable person.”

As for Fr. Iov himself – he was notable for his almost bashful modesty and unassuming demeanor, never spoke much, would avoid conversing with pilgrims to the monastery, and was never known to raise his voice. At the same time, he loved to sing on kliros – he had a strikingly mellow baritone. During Great Lent he would sing the trio for «Let My Prayer Arise.» At Vigil he would always read one of the canons.

In winter, when farm duties dwindled, Fr. Iov would turn his tractor into a snowplow and remove snow not only from the monastery's roads and paths, but also the driveways of the lay Orthodox people who had settled around the monastery. On snowy mornings, sometimes even before daybreak, sleepy monastery neighbors would wake to the hum of a snowplow in their driveway and thankfully realize that they wouldn't have to spend time digging themselves out of the snow by hand, and would be able to get to church, work or the store on time. During any leisure hours he had in winter Fr Iov would immerse himself in reading and, according to a monk who worked as librarian, would be the most frequent visitor to the seminary library.

In summertime, on Sundays and feast days Fr. Iov would rest from his farm labors by going fishing. Whenever Metropolitan Filaret, another avid fisherman, would come for a visit at the monastery, Fr. Iov would be asked to accompany him on a fishing trip. However, on those days, Fr Iov would not actually fish himself, so as not to inadvertently catch more fish than the first hierarch, but would only assist the latter in putting worms on the hooks.  Nevertheless he would be quite pleased if he himself ever chanced to land a good catch. It so happened that one of the teachers at the seminary, Vladimir Rusak, was away on the Sunday that Fr Iov was elevated to the rank of archimandrite. Upon his return, Vladimir learned of what had transpired, and in meeting Fr Iov exclaimed: “Congratulations, Father!” Father Iov answered: “Who told you? Can you imagine – I caught a pike that was THIS BIG!”

In his old age, Fr Iov continued to work as much as he could, despite the fact that his arthritic knees made it painful for him to walk. Serving also became difficult. Even when he was no longer able to serve liturgy alone, Fr Iov was assigned to serve on those days in Great Lent when there is no liturgy. He accomplished this with the aid of a cane. The readers on kliros had to drag out the reading of the psalms at the beginning of matins so as to give Fr Iov a chance to cense the church, holding the censer in one hand, and leaning with the other on his cane.

Then another sorrow struck – Fr Iov lost his voice, and could no longer read or sing; however, he continued to stand during the Divine Services on the left kliros as before.

Even when he was completely beset by infirmity and sickness, Fr Iov never complained, lost his composure or became irritable. Whenever someone would drop in to visit him in the monastery infirmary and ask: «How are you, Father Iov?» he would always answer – in his hoarse voice, but with his meek, radiant smile: «I'm good, I'm good.»

We are grieved at having lost the last of the monks who labored at Holy Trinity Monastery since its early years, yet we rejoice that he will be praying at the Throne of God for us who still remain on earth. May his memory be eternal!