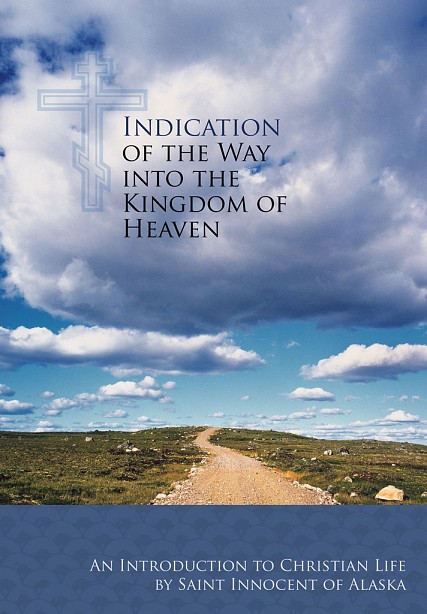 Holy Trinity Publications is proud to announce its newest release, a new edition of Indication Of the Way Into the Kingdom of Heaven.

The book was written in 1833 by the then Priest John Veniaminov, who would go on to become the first Orthodox Bishop in America, and is now known throughout the entire Orthodox world as St. Innocent of Moscow and Alaska.   St. Innocent, at the time, was a missionary priest among the Aleut peoples of Alaska, and his book was published first in their language.   Following in the footsteps of Sts. Cyril and Methodius and countless Orthodox missionaries before him, St. Innocent was quick to appreciate the need for people to hear about the Word of God in their own language. Since that time, it has been translated into many different languages and never been out of print, continuing to touch the souls and open the hearts of those eager and ready to hear God’s message of love.

St. Innocent, in his introductory words, reveals the ultimate truth of our existence here on Earth, “People were not created merely to live here on earth like animals that disappear after their death, but to live with God and in God, and to live not for a hundred or a thousand years, but to live eternally.”  With these heartening words St. Innocent sets his readers off on their own personal search for salvation

This new edition includes points of reflection at the end of each chapter, making it an ideal text for catechesis, church schools, and group studies.

Further information about the book and how to order it can be found here.

O Holy Father Innocent, Pray to God for Us!!