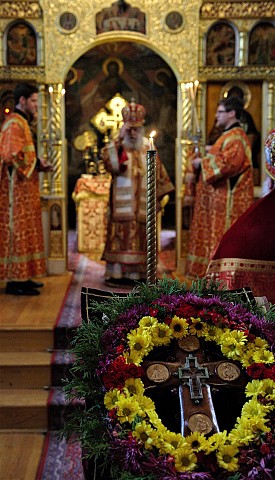 The monastery has an immense blessing in having in its possession innumerable relics of saints.  One of our most treasured relics is a piece of the Honorable and Life-Giving Cross of the Lord.  It is set in a beautifully carved, wooden archimandrite’s cross which belonged to the ever-memorable Archbishop Averky, when he was an archimandrite in the Carpathian mountains area of north-western Hungary, before World War II.  Eventually, Vladyka used his cross for the setting of the wondrous relic, which itself was placed in a larger Maltese shaped cross, and which is used in the monastery for feasts of the Cross, especially the Exaltation of the Cross.

As per the Church’s typicon, the Cross is decorated with live flowers and set upon the holy altar at the end of Small Vespers on the eve of the feast.  Little bunches of flowers, mainly marigolds are collected and placed in a large basin which is later used in the ceremony of the Exaltation.

According to the Church’s typicon, the Cross was brought out at the end of the Great Doxology, towards the end of the All-Night Vigil, Saturday evening.  His Grace Bishop Luke presided at this ceremony.  Two hieromonks supported Vladyka as he carried the Cross on his head, through the northern door, up to the Royal Gates.  He then blessed the faithful with the Cross as the bells rang out in a festive trezvon.  After placing the Cross on a specially prepared analogion, the office of the Exaltation commenced.  Vladyka raised the Cross all the way up after a special petition voiced by a deacon, and then lowered the Cross all the way down to the ground, while the choir sang “Lord Have Mercy,” one hundred times.  Two hieromonks meanwhile poured rose water over the Cross, which dripped down into the basin filled with fragrant flowers.

This procedure was repeated four times, in the other three directions and then once more towards the east, whereupon the hymn, “We venerate Thy Cross, O Master…” was sung three times.  The choir, which was in the middle of the church during the ceremony, returned to their places and sang the verses appointed for feasts of the Cross, while the clergy, followed by the faithful, prostrated themselves before the Cross, were anointed by the bishop and received a handful of flowers from the basin as well as the usual blessed bread dipped with blessed wine.

Next day, the Divine Liturgy was presided over by Vladyka Luke.  This year, the solemnity of the liturgy was increased by the ordination of Deacon Dimitry Chemeris to the priesthood, by Vladyka Luke, with the blessing of Archbishop Gabriel of Montreal and Canada.  We congratulate Fr. Dimitry and ask God’s blessings upon him as he begins his new obedience.  He will be serving in our Hamilton, Ontario parish.  His son, Ivan, is a 2nd year seminarian here in Jordanville.