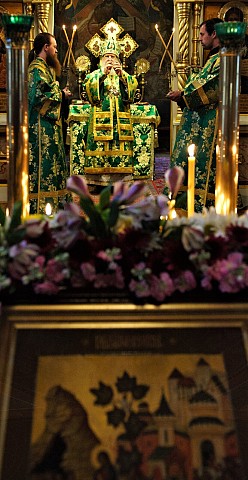 “Hosanna in the highest.  Blessed is He that cometh in the name of the Lord,” exclaimed the children of Israel, as our Lord proceeded into the Holy City, surrounded by many people who thought that he had come to overthrow the Romans.  This after it was widely reported about how He had raised Lazarus from the dead.

The ever-memorable Metropolitan Laurus, in a sermon given by him in the monastery during the Vigil of this feast many years ago, stated that the same people who praised him with palms and branches as was the custom in that part of the world, later shouted:  “Crucify Him, crucify Him!”

Let this be a reminder to us that also not fall into this horrible sin of at one time, praising our Lord, and then causing Him much pain by our lack of repentance.

This feast is at once very joyful, as the Lord comes to us for the purpose of laboring for our salvation, but at the same time, we are filled with sadness, knowing that which awaits Him.

As is traditional, our brothers and seminarians prepared boughs of palms and pussy willows for handing out to the faithful during the Vigil.  His Grace, Bishop Luke, presided at this.  Lit candles as well were distributed.  The following day, Vladyka served the Divine Liturgy together with monastery clergy.  During the Hours, Vladyka tonsured John Ilyn to be a reader.

In the evening, Great Vespers was served, and liturgically we entered the solemn period of Holy Week, when we commemorate and accompany our Lord on the journey of His Passion.