Feast of the Exaltation of the Life- Giving Cross 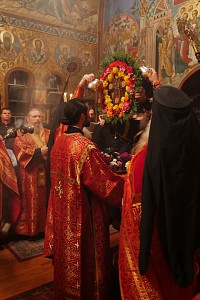 The monastery is very blessed to have among its many precious relics a piece of the Cross upon which our Saviour Jesus Christ was crucified.  It is contained in a pectoral cross once worn by the ever-memorable Archbishop Averky, a previous abbot of our monastery, when he was an archimandrite in Eastern Europe.  As a bishop, he had the relic of the Cross placed in his pectoral cross, also made of wood, and that cross is used for a couple of the feasts of the Cross, including the Exaltation.

As is the custom, the Cross was brought out to the center of the church at the end of the chanting of the Great Doxology, by His Grace Bishop Luke, accompanied by the monastery clergy.  Vladyka raised the Cross five times in all directions as two hieromonks poured rose water over the Cross, decorated in beautiful flowers.  The water poured down into a large pan filled with cut flowers, mostly marigolds with basil, thus issuing a most fragrant blend of flowers and herbs.  These bouquets were then handed out to the clergy and the faithful as they were anointed with myrrh from the Hawaiian Icon of the Most Holy Theotokos of Hawaii.

As the Cross was elevated in all four directions and then once again facing the east, the choir sang, “Lord Have Mercy,” one hundred times.  Throughout the following week, up until the Leave-taking of the feast, the Cross will remain in the middle of the church for the veneration by the monks, seminarians and faithful.  “We bow down before Thy Cross, O Master…” is sung at the end of Liturgy, Compline and the Midnight Office.