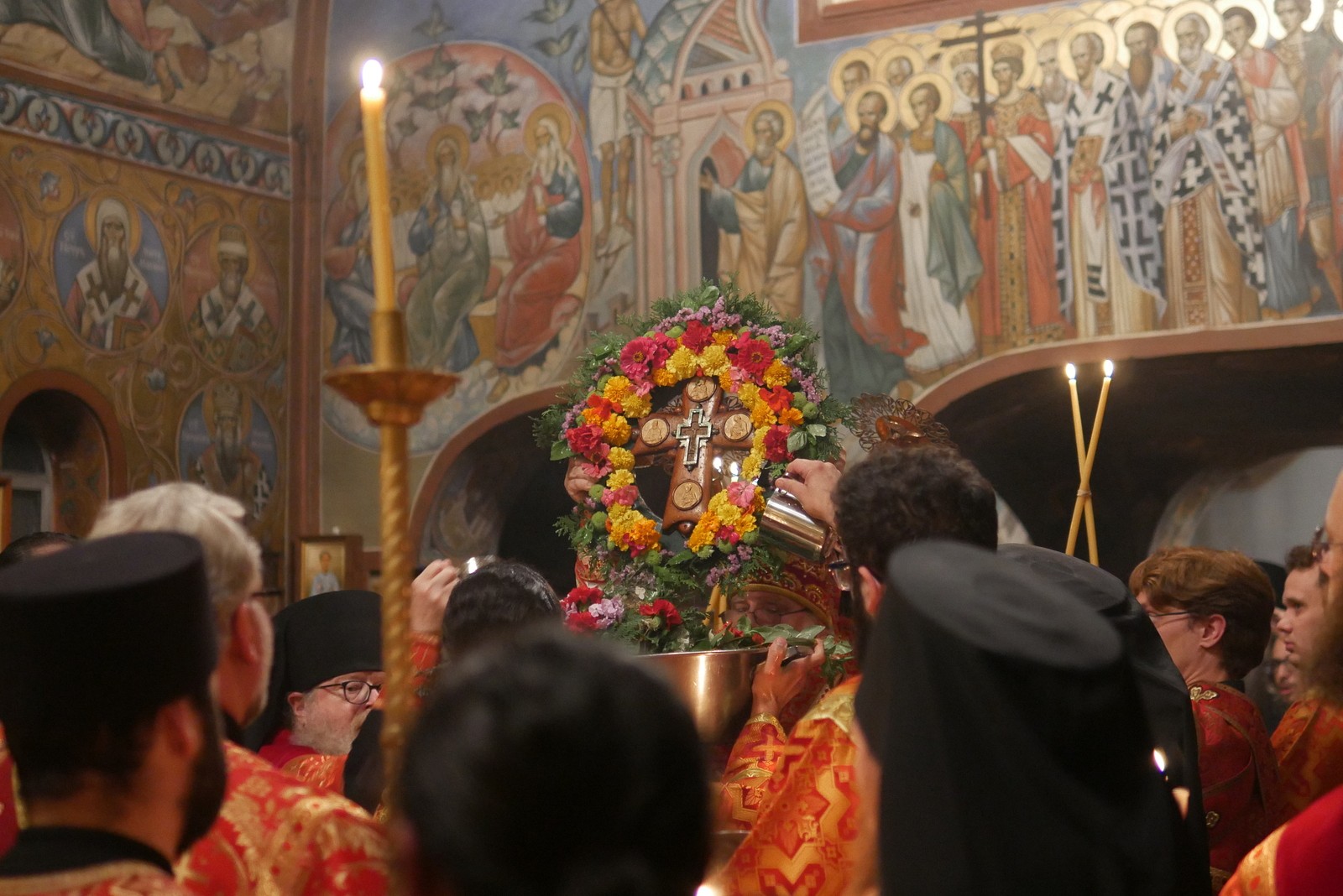 Among the many relics that the monastery is blessed to have, perhaps one of the most precious is a piece of the true Life-Giving Cross of our Saviour.  It is contained in a beautiful wooden pectoral cross, which belonged to the every-memorable Archbishop Averky, previous abbot of our monastery.  The cross itself is contained in a larger cross.  This cross is the one used for a couple of the commemoration days of the Cross of our Lord, specifically for this feast.

As per the typicon, the cross is decorated in flowers before the 9th Hour on the eve of the feast.  Also, a large pan of flowers, especially marigolds, are collected, and fresh basil is placed both on the cross as well as in the pan, as per tradition, when St. Helena discovered the Cross in the 4th century, the air gave off such a fragrance as that of the herb basil, whose name in Greek means “King.”

The All-Night Vigil proceeded as is usual for a vigil of a great feast, with the exception that the usual anointing with oil is done after the veneration of the cross, which itself happens after the cross is brought out of the altar at the end of the Great Doxology.

In the event, the cross, decorated with flowers with a candle burning behind it, was placed on the altar table at the end of Small Vespers by the serving priest with censing and the chanting of the troparion and the kontakion of the feast.

At the beginning of the Great Doxology, Bishop Luke together with the serving monastery clergy, stand around the altar table, while Vladyka censes the same.  Then at the end, while the choir solemnly chants “Holy God, …” the cross is brought out on the head of Vladyka, supported by the clergy.  Standing before the Royal Gates, Vladyka blessed the faithful with the cross, and subsequently he placed the cross on a prepared analogion.  Once again, the cross is censed by Vladyka while the choir chants the troparion.

Immediately afterwards, the cross is taken by Vladyka and the service of the Exaltation commences.  The cross is raised and lowered in all four directions while the two archimandrites poured rose water over the cross, which drained into the pan containing the small bouquets of flowers.  During each elevation the choir chants “Lord have mercy,” one hundred times.  After this still another time the cross is elevated facing the east.  Thereupon the appropriated hymns are chanted, starting with “We worship Thy Cross…”  All of the clergy and faithful do full prostrations while this is chanted thrice.  Then all proceed to venerate the cross in order, and then are anointed by Vladyka while priests hand out small bouquets as well as the blessed bread.

On the feast itself, Vladyka served the Divine Liturgy together with the monastery clergy.  After the Small Entrance, instead of the usual trisagion, “We venerate Thy Cross…” is chanted.  At the end of the liturgy, the cross is venerated by all present.  This is done at the end of every liturgy during the afterfeast as well as at the end of the Midnight Office and Small Compline.